Lawrence Lessig could be called a cultural environmentalist. One of America's most original and influential public intellectuals, his focus is the social dimension of creativity: how creative work builds on the past and how society encourages or inhibits that building with laws and technologies. In his two previous books, Code and The Future of Ideas, Lessig concentrated on the destruction of much of the original promise of the Internet. Now, in Free Culture, he widens his focus to consider the diminishment of the larger public domain of ideas. In this powerful wake-up call he shows how short-sighted interests blind to the long-term damage they're inflicting are poisoning the ecosystem that fosters innovation.

All creative works-books, movies, records, software, and so on-are a compromise between what can be imagined and what is possible-technologically and legally. For more than two hundred years, laws in America have sought a balance between rewarding creativity and allowing the borrowing from which new creativity springs. The original term of copyright set by the Constitution in 1787 was seventeen years. Now it is closer to two hundred. Thomas Jefferson considered protecting the public against overly long monopolies on creative works an essential government role. What did he know that we've forgotten?

Lawrence Lessig shows us that while new technologies always lead to new laws, never before have the big cultural monopolists used the fear created by new technologies, specifically the Internet, to shrink the public domain of ideas, even as the same corporations use the same technologies to control more and more what we can and can't do with culture. As more and more culture becomes digitized, more and more becomes controllable, even as laws are being toughened at the behest of the big media groups. What's at stake is our freedom-freedom to create, freedom to build, and ultimately, freedom to imagine.


:) "Lessig's intent in this book was to educate readers about the history of copyright laws and copyright issues, including the current debate on copyright/internet issues. I can vow that Lessig achieved his purpose, as I am neither a lawyer nor a computer geek, and I was able to grasp his ideas of both the technical issues as well as the legal ones."

:) "As a lead lawyer in the case before the US Supreme Court to overturn the Copyright Term Extension Act, the author knows his stuff. At the same time, Lessig gives enough real world examples of how copyright law effects all of us to keep this from being a dry, academic tome. Highly recommended." 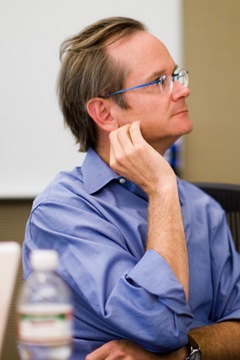