TeX by Topic, A TeXnician's Reference

A systematic reference manual designed as a companion to tutorial guides on the system. Provides an information source packed with original and practical ideas that will give the TeX user the essential insight needed to solve TeX problems.

TeX by Topic, A TeXnician's Reference

A systematic reference manual designed as a companion to tutorial guides on the system. Provides an information source packed with original and practical ideas that will give the TeX user the essential insight needed to solve TeX problems.


Victor Eijkhout wrote:TeX by Topic has long been out of print. Now that the publisher has reverted the rights to me, I have decided to make the book freely available in PDF form. Go ahead, download and enjoy it. What you are getting here is a conversion to LaTeX of the original book, which used a non-standard macro package. In other words, you get the text, but not the original formatting.

To the casual observer, TEX is not a state-of-the-art typesetting system. No flashy multilevel menus and interactive manipulation of text and graphics dazzle the onlooker. On a less superficial level, however, TEX is a very sophisticated program, first of all because of the ingeniousness of its built-in algorithms for such things as paragraph breaking and make-up of mathematical formulas, and second because of its almost complete programmability. The combination of these factors makes it possible for TEX to realize almost every imaginable layout in a highly automated fashion.

Unfortunately, it also means that TEX has an unusually large number of commands and parameters, and that programming TEX can be far from easy. Anyone wanting to program in TEX, and maybe even the ordinary user, would seem to need two books: a tutorial that gives a first glimpse of the many nuts and bolts of TEX, and after that a systematic, complete reference manual. This book tries to fulfil the latter function. A TEXer who has already made a start (using any of a number of introductory books on the market) should be able to use this book indefinitely thereafter.

In this volume the universe of TEX is presented as about forty different subjects, each in a separate chapter. Each chapter starts out with a list of control sequences relevant to the topic of that chapter and proceeds to treat the theory of the topic. Most chapters conclude with remarks and examples.

Globally, the chapters are ordered as follows. The chapters on basic mechanisms are first, the chapters on text treatment and mathematics are next, and finally there are some chapters on output and aspects of TEX’s connections to the outside world. The book also contains a glossary of TEX commands, tables, and indexes by example, by control sequence, and by subject. The subject index refers for most concepts to only one page, where most of the information on that topic can be found, as well as references to the locations of related information.

This book does not treat any specific TEX macro package. Any parts of the plain format that are treated are those parts that belong to the "core" of plain TEX: they are also present in, for instance, LATEX. Therefore, most remarks about the plain format are true for LATEX, as well as most other formats. Putting it differently, if the text refers to the plain format, this should be taken as a contrast to pure IniTEX, not to LATEX. By way of illustration, occasionally macros from plain TEX are explained that do not belong to the core. 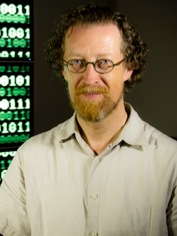 Victor Eijkhout is a research scientist at the Texas Advanced Computing Center.

Victor Eijkhout is a research scientist at the Texas Advanced Computing Center.